Operation - I was part of a seal team that needed to rendezvous with rangers and exfil the hostel area.

After exfil, the objective was to prevent opfor from holding a control point signaled by raising a flag in the middle of the swamp. I moved into the swamp from the east and headed west toward the objective about 60 ft south of the flag pole. I was paralleling a small fire team of 3 to my north.

I was stalking low through the swamp and caught a glimpse of movement to my left. At 1222 while staying just above the 5 ft, tall swamp grass I glassed to the south west just in time to observe an enemy combatant pass through an open space and behind cover. I wait for approximately 30  seconds and see another opfor travelling the same path as the first. I estimated the range to be 90 ft.

Once he was clear in the open I sent a round his way. I did not have time to confirm the hit as I crouched immediately to not give away my location the shot looked true and I am confident that he was eliminated. 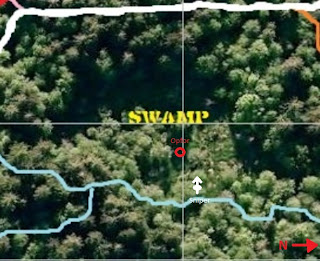 I continued to head west and found cover under a laid down tree about 100 ft South east from the objective. I added some natural foliage to my ghillie suit and created a small hide to provide over watch on the objective.

At 1250 the opfor rallied an assault on the objective and maid a strong push towards towards the flag. I counted 5 but suspected there was around 7 opfor. I readily identified the enemy team leader as he was shouting orders. They were not aware of my location but I was only 30 ft away from the enemy team commander. I pulled out a frag (thunder B) and threw it towards the team commander and scored a elimination on him and one other.

The fire team I was parallel to eliminated the remaining attackers. I noticed movement in the grass and observed an opfor that had taken cover. I observed that he had a hard black plastic "skull" mask. I watched him for a minute and at 1255 I decided to not let him go and squeezed the trigger. I watched as the BB travelled 40 ft and impacted in the forehead of the opponent. Confirmed kill.

I maintained my position for an additional 15 minutes when I heard movement behind me and close. I did not have time to turn so I hunkered down in the grass and waited. An enemy opfor approached within 8 ft of my position. I waited until I was on his side and safety killed him.

Well I have it and it is a really nice gun, Go to the top of my page and click on the review tab to see the video review.
Posted by Newbie at 9:46 AM 2 comments:

Hey just wanted to let you all know that there is a new webstore that sells high quality BB's for low prices including shipping. Below is the link, Free Shipping to US only

http://www.bulkairsoftammo.com/index.php/
Posted by Newbie at 9:37 AM 2 comments:

Looks like king arms will have some after market parts available soon for the Blaser R93, Initially looks like spring guide, springs, and barrel spacers. Coming soon.....

Well after all of my complaining for the last 3 months finally evike has a preorder price and an estimated ship date. right now price is set at $ 180 US and the estimated ship date is 04/2012. Pre ordered mine over the weekend so as soon as I get it I will have my review up on you tube and probably here on my blog as well.
Posted by Newbie at 8:37 AM 1 comment:

Well I have been spending the winter here building ghillie suits and building targets for IPSC / IDPA style airsofting. I have a blast shooting in a competitive style but I am not into the cost of the real steel version of it. I will post some pictures soon of some of the targets I have been making. I have a brief view of them on my latest video on the you tube page scene below. I am working on a star target now, should be fun !