Found this new product. below is from the product webpage

"Here we are again with another eagle6 product, made by us on a CNC machine in hard plastic. The idea here is to improve on the marui hop design which doesnt account for high power and heavy ammo thats used outside of japan. The principle is simple the arm has a steeper slit in the center. Thus when you adjust your VSR with an Eagle6 arm installed it cuases the ammo to hop sooner. If your using 0.2s this obviously will result in skyed shots. But if your using 0.28 and over what youll see is more spin applyed to the heavy ammo. What your aimming for with ANY AEG or Sniper is too be ABLE to go too far... you want to see a skyed shot even on HEAVY ammo. Then you know your guns reaching its fullest potential. Then you bring it back to what YOU are happy with as your ideal shot. We also machined it a little wider for a better fit in the vsr hop unit hopefully removing an side to side flex or movement. We do small batch runs so any snipers out there that want to contribute to the design or feel that the early or later timing needs adjusting let us know on the email and we can look into it for future versions or bring out a third type."

Sounds awesome, wish I had a vsr to try it out in. maybe I will pick one up again!
Posted by Newbie at 5:48 AM No comments:

With the start of Operational Detachment Omega (ODO) and being integrated into the teamwork aspect of airsoft things were going really well. I began being more and more involved in the milsim side of airsoft and that is where my passion was. Shure skirmishes are fun and who doesnt like shooting people out, but to me it was so much more rewarding to sit up on a hill in concealment and call out enemy troop movements to my team and perform as more of a reconassaince role than just pulling the trigger and shooting someone out. 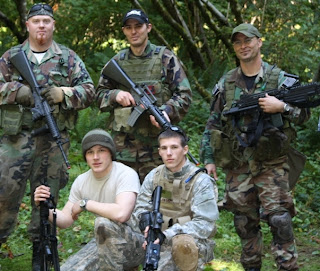 A few of the core members of ODO
ODO was going well and peaked in July of 2010 where we helped host a SERE style event with the Praetorian Guard Airsoft team. Several members fo ODO participated in this 36 hour operation designed to test the mental and physical toughness of airsofters. It was a blast. 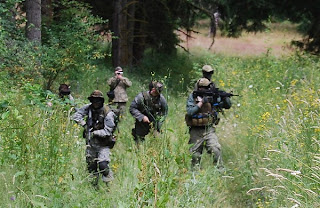 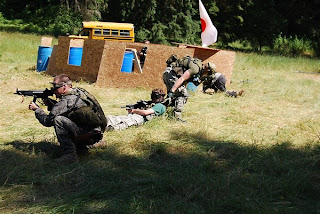 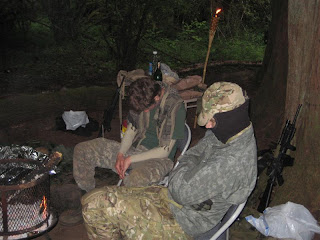 After the SERE event we had a few other ops for the year. The Winter of 2011 was extremely slow and airsoft pretty much fell off the map. Once spring rolled around things picked up a little but for the most part everything had changed. ODO began difficult to manage several things happened that hindered the core members drive for airsoft. Military deployments took away two members, real life issues unfortunately affected us all to where we were only able to have 1-2 members present at an op. We were able to recruit  a little bit but for the st part airsoft was limping along. It was no where near what it was in 2009, and 2010.
Life definitely started getting in the way. People's family commitments and the military deploying people to Afghanistan really hurt our numbers. We recruited a few other members but for the most part it just kind of fizzled out. In July of 2011 the I realized that for me the reward was no longer worth the effort involved in running and organizing an airsoft team. For those of you team leaders out there, you know how difficult it is. Some issues in my personal life came up and it pushed me over the edge of being able to manage it all so I stepped down as team leader. I will not speak to the future of the team as it is not my place.
Still wanting to play airsoft and be involved I decided to start the Scout Sniper Airsoft brand. Airsoft is more than just shooting people with plastic BB's to me, it is the experience. I am in it for the military simulation aspect which is why I chose "scout sniper" in respect to the Marine Corps Scout Sniper platoons. I enjoy the scouting / reconnaissance aspect of airsoft and I am perfectly happy sitting in a bush all day and calling out enemy team movements over the radio and not firing a single shot.
Also from the Marine Corps is where the "SS" comes from. I have had several inquiries especially from people in Europe about it and although the Nazi's have given it a bad rap it has nothing to do with them. So if if you are offended by the "S" in my logo I want you all to know that it has nothing to do with Nazi's

Thinking about jumping on the bandwagon with getting some of the new "A-Tacs" camo, not good for the woods in my opinion but looks great in MOUT or desert terrain. Found a good price at the link below plus free shipping

Posted by Newbie at 2:05 PM No comments:

What !!!! why dont we get this sweet piece of awesomeness in the US ? so far I have been able to locate this badboy at airsoft stores in UK, Ireland, Spain, Portugal, France, and Italy and none of them will ship to the US. At least release it in Asia so those of us here can buy it. I will keep my figures crossed
Posted by Newbie at 2:06 PM No comments:

Well first off I have been airsofting now for 3 years now. Before I began airsofting I played paintball for 12 years, 1 of which were for a semi-professional team. I grew tired of all of the annoying kids that would show up at the field in their shiny new pants and shirts that mommy and daddy bought for them, with very little respect for anything. The cost of paintball began to get ridiculous as I gained more and more responsibility in life.

Knowing nothing of airsoft but the clear plastic guns I saw at walmart I never thought anything of it. After a year away from paintball I needed to get back out in the woods and do some hunting of the two legged kind. I stumbled upon scout the doggies you tube page and my eyes were opened to a whole new world.

With a very supportive wife and the approval to spend the funds this is where my airsoft addiction began. Armed with my JG MP5 (yes they stilled called them that when I got it) I sought out a local airsoft group here in Washington State, 1st-Sword. My first official operation (non backyard kind) was on February 21st 2009 at the Shelton field.

Armed with 12 years experience of paintball I was ready to show up all of these sissy airsofters. Well lets just say that didn't happen. used to a 50' range I wouldn't even shoot at people 150' away, there was shock and surprise on my face when I was getting shot out by people that seemed so far away. Between the range and the fact that BB's can cut through bushes I pretty much got shot out the whole time. I had a blast and was hooked. I knew that I had so much more to learn.

With the help of "Jaws" and airsoft mechanics I began to learn the innerworkings or AEG's. Though my true passion was found when I purchased my first BASR (bolt action sniper rifle). It was rough at first as the game play and dynamics of a airsoft sniper are vastly different than that of your casual rifleman. My first rifle was a well MB05 that I actually played with in its stock configuration for about 3 games. I barely passed the sniper qualification test with it and I think I shot out maybe 2 people in 3 games, I needed to upgrade.

1st BASR after upgrades (top one)
After pouring several hundreds of dollers into my MB05 I created a beast that has been felt by many.
My obssesion for airsoft continued﻿. It wasn't until I met another local sniper named "fish" that I saw the tactical advantages to wearing a ghillie suit. It was then that I began my other hobby of making ghillie suits. I wish that I had documented my process all along but I have studied several texts and talk with many military snipers trying to find a balance between real world and airsoft world for the right combination of materials for ghillie suits. Although I dont always wear one I am definately a fan. 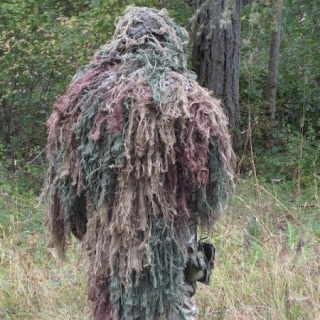 my most current ghillie
Early on in my airsofting career I wanted to start a "Team". Myself as well as a few other local airsofters who were new to the scene formed Operational Detachment Omega (ODO).
Please stay tuned for more
Posted by Newbie at 11:34 AM 1 comment:

Well I am definately new to blogging and I am not sure if any one cares about what I have to say about airsoft but I will give it a go.
Posted by Newbie at 1:37 PM No comments: