Before you think "I have seen this before" it is because it used to be posted in a different location. Below is my video review of the same gun. As well as the written review


My new Well MB08 was originally purchased from Airsplat (I know a lot of people have something to say about them but I have purchased several items from them over the last two years and never had any problem). It arrived 4 days after the initial order. Upon receiving the larger outer box I opened it to find a plain brown box with no markings on it what so ever. The box was slightly damaged in that it had a couple of depressions from where the sling mount and the stock catch were slightly elevated above the styrofoam packing.

The sling is less than desirable and should only be used if necessary. You are better off using a piece of twine than this sling as the metal clasps are notorious for breaking. 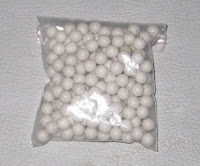 The standard issue pack of .20g BB's, might as well throw these away unless you have a cheap springer floating around. Buy some heavier weight BB's ASAP. The speed loader is pictured above and is the standard pistol mag 90-100 round style, comes with an adapter for loading magsThe Bi-Pod has adjustable spring tensioned legs which will adjust out an additional 1.5 inches. The total length with the legs extended is 10 inches.

The scope is a generic 3-9 x 32 mm scope with 1 inch scope rings that mount to a Weaver style rail. While it is nothing worth writing home about it is a fairly decent scope considering its intended application. The scope is non-illuminated with standard crosshairs. It has a 2 - 2.5 inch eye relief and while their is no parallax adjustment on the objective bell, it has both windage and elevation turrets. Also included are amber colored see through lense caps. 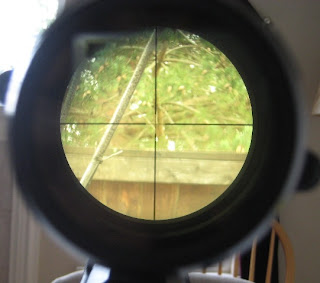 This gun has a great initial feel to it and it follows suit with all the other type 96 style rifles in that it has an ergonomic grip that is very comfortable to hold. The stock is plastic but it has a very dense, solid feel to it that is unlike the Well MB01 which has more of a cheap ABS plastic feel to it. I cannot actually see any added weight to it (there may be some in the stock somewhere) and while it is lightweight it is well balanced and does not feel front or back heavy.﻿
For a couple of negative impressions it has a very obvious seem line that extends the entire length of the stock on the bottom side of the gun (pictured above). It also has a nice "made in china" painted on the left side of the stock just in front of the trigger guard. Additionally the magazine catch (which also holds the hop up in place) on the barrel was loose and needed to be tightened.
Overall I was very impressed with the quality of this gun. With its balanced weight and ergonomic body design it is very comfortable to hold and easy to shoot.

Even though this gun is the typical "type 96" style it has many features on it that separate it from other guns of the same style that are out on the market. Some of the features are small ones while others are a large enough to make this one of the best type 96's out there.

Folding Stock - The stock folds midway through the grip. It is very solid when extended and locks very tightly to the body of the gun when collapsed. It shortens the length of the gun a total of 10 inches, from 45.5" in overall length to 35.5". It has metal sling attachment points on both sides of the stock so you can sling the rifle while collapsed and extended. To collapse the stock there is a solid metal push button on the top at the hinge point that depresses to make the stock fold. This feature makes the rifle very compact and easy to sling to your back or store in a small compartment.
Monopod - The Well MB08 also features a collapsible monopod. The monopod is on a spring tension release. To deploy it one simply needs to pull down on it to the desired height and it locks in place. It retracts by depressing the bottom plate at the base of the monopod. This feature is great while on target for long periods of time and it helps stabilize the rifle while shooting, but I don't think that I personally would ever use it in a game. It looks cool though and makes the rifle feel a little more legit. 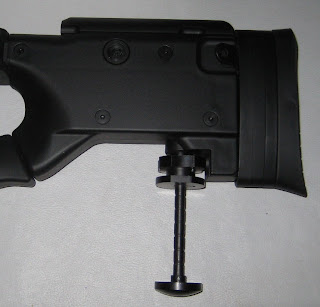 Adjustable Cheek Rest - Poor design and poor execution. While initially excited about the adjustable cheek rest, I was very disappointed in this. I use the cheek rest on my Well MB05 all the time and it is almost a necessity., but on the MB08 I believe that they failed miserably. On the right side of the gun there are two adjustment knobs (one of which fell off while I was adjusting it). The knobs are nothing more than a bolt that tightens through a threaded collar inset in the stock. These two bolts press up against two skinny plastic pieces that are attached to the bottom of the cheek rest. It is not a levered or gear styled adjustment simply loosen the bolts and pull on the cheeck rest then tighten the bolts down to keep it in place. It is very flimsy and not very reliable; it feels as though I am going to snap the cheekrest when tightening the bolts. You are better off just leaving it in its lowered position. Should you choose to use the cheek rest, it adjusts up around 1.25 inches. 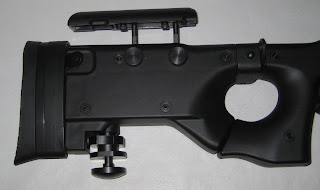 Internals were a little dissapointing but before any of you nay sayers think "what do you expect" "its a Well" or "Its a Chinese piece of junk" I want to state that I initially purchased this with the intent on completely replacing the internals, in fact I had all of the after market PDI and Laylax parts before the gun even arrived. With that being said this thing, internally, is a piece of junk. Talk about a lemon. I know most reviews try to put a positive spin on things but I will not sugar coat it. If you are not planning on upgrading the internals, and want some decent performance than get something else.
When I first took the gun apart I looked at the barrel and hop up. When I removed the barrel there was only one flimsy little piece of warped rubber acting as a barrel spacer (pictured). Most stock rifles have these crappy little barrel spacers but I have never seen only one in a gun before. The stock hop up is usually a decent build and design, mine was actually broke. The hop up control arm is plastic and kind of weak and when I removed the hop up adjustment collar I noticed that the control arm was cracked almost all the way through. It took very little to break it the rest of the way off which makes me think that it would have happened fairly soon. Which is not good considering I have only fired around 80 shots through it (I tested its stock performance before I pulled it apart).The shape of the control arm is its highlight, the piece that applies pressure to the bucking is in a U shape that resembles a H - nub for an AEG which allows it to get a nice, even backspin on the bb's allowing it to be able to get some pretty straight trajectories on .43g bb's in its stock configuration.
A guide to dissasemble the Well MB08 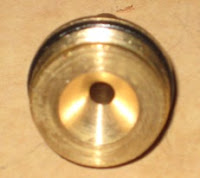 The barrel is the standard 495mm brass type 96 barrel that is a non tight bore barrel that comes with most airsoft weapons. It was fairly straight, clean, and is decent as far as stock barrels go.
The bolt and cylinder assembly are well made. The cylinder is stainless steel (I am no metal specialist but judging by its weight and durability it is SS) with a brass cylinder head. The stock cylinder head (pictured above) is non tapered but has the high air flow design milled into its base.  This is nice as this used to be an old school trick to grind the cone shape into the cylindar head for a small fps boost and a little better consistency, now you dont need to. The spring guide and piston (pictured) are the same plastic ones that come in a Well MB01, and MB05.

The trigger assembly is definitely the weak link in this chain. It comes in an all plastic housing (which is typical). When I first attempted to attach the bolt assembly to the stock I notice a large "bump" of plastic (pictured) on the outside of the trigger housing. After examining and finding out that it serves no purpose other than to cause the gun to not assemble correctly I ended up grinding it off. My guess is that it was the largest casting flash that I have ever seen. After opening the trigger housing it appears as though the piston sear and the trigger sear are both either pot metal or a very strong plastic. They are not heavy enough to be stainless steel and are non magnetic, but they are not light or weak enough to be plastic. I assume that after I upgrade that they will not last very long and snap once the 190 spring goes in. The safety catch and trigger are both plastic, and the spring guide stop is metal. 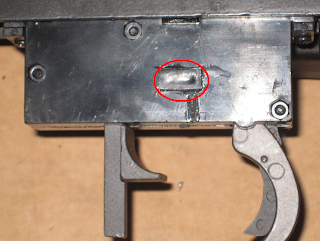 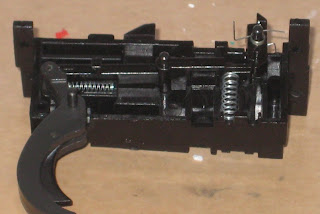 All performance testing was performed in its completely stock configuration and before I disassembled the gun. The MB08 shot very consitent in the chronograph with a range of 5 fps it averaged 398 fps with a low of 396. This is no where close to the 450 that was advertised through airsplat, and I am sure that all of you are completely shocked that a gun fired slower than the always over inflated fps advertisements.
I don't want to bore you all with how the gun shot at 75 feet, c'mon people if you are going to review a bolt action rifle that shoots over 400 fps back it up a little bit. Most fields, teams, or groups require at least 100 ft. minimum engagement distance for guns over 400 so who cares how it shoots at 75? Sorry I am done with my rant, I posted a 12" target at 150 feet for my accuracy testing. It was a 50 degree day with no wind or rain. BB's were the .43 g from Airsoft Outlet NW and were hand weighed and selected for their perfection for this test.

The MB08 shot 70 % at 150 feet on a 12 inch target, and 40 % scored in the 6 inch inner ring. I know it doesn't sound that accurate (because it is not) but it was really around a 8 inch grouping and the ones that missed where complete flyers. This is probably because of the one flimsy barrel spacer, broken hop up, and the non tight bore barrel.

You wont be threading any needles but overall performance for the stock configuration is not too bad. If you happen to find someone standing out in the open in front of the broad side of a barn you will be garunteed to hit something........

The Well MB08 has a lot of new and cool external features but falls way short when it comes to stock performance. This gun is a great platform to build on, and is capable of being a great airsoft bolt action rifle, but it will require time and money to get it there.